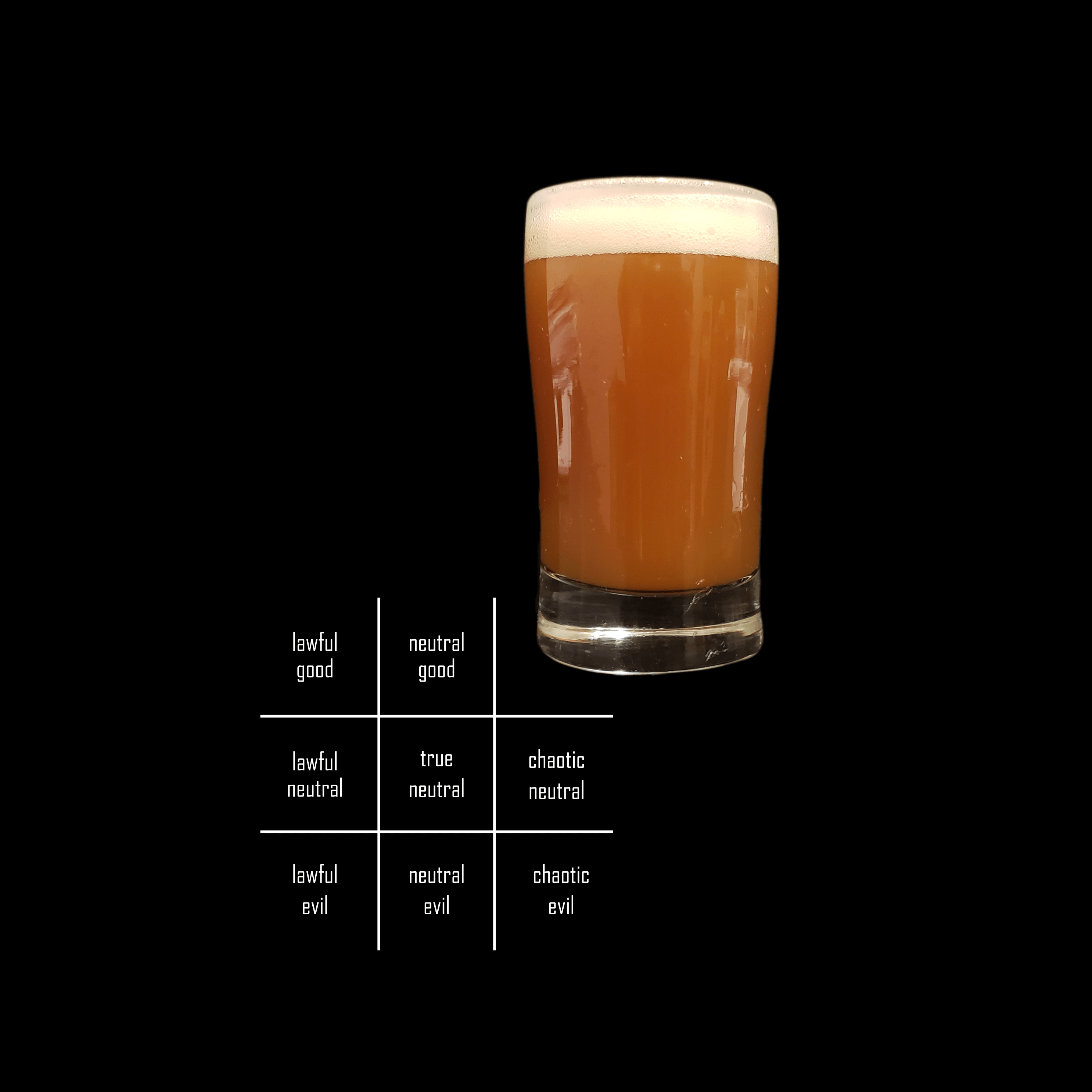 Chaotic Good Ginger Beer is a moderately hopped, golden colored ale that has been conditioned on hand-grated raw ginger root.  This beer has a refreshing gingery bite that is balanced nicely with a hop profile that is slightly bitter and slightly floral.  We highly recommend taking some of this home to make yourself an extra stiff Moscow Mule!

The “Alignment System” is a wonderful invention from the game Dungeons and Dragons.  The alignment system is effectively a spectrum of behavior (from lawful to chaotic) cross-referenced with a spectrum of intentions (from evil to good).  The system essentially defines rules for making decisions when faced with questionable circumstances, and it’s an important character-development tool in DnD.  A “lawful good” character, for example, will always attempt to do the most good, but is philosophically incapable of breaking any rules.  A “lawful evil” character might see a well-ordered system of rules as being easier to exploit, and is willing to function within sets of rules in order to act on their intention to do harm.

Chaotic Good characters though, are defined by an unwavering will to believe in and seek out the goodness in the world, while having a sometimes baffling ability to ignore rules and question authority.

Most things about Bias Brewing are chaotic good.  The Chaotic Good Ginger Beer, with its gingery aromatics, will be there to soothe your sore throat, even if a “lawful good” personality would tell you that drinking while you’re sick is a bad idea.  Now, at Bias we obviously have to follow the “laws” in order to operate as a brewery, but we don’t mind breaking some “rules” about what is “normal” and trying a lot of different things and taking new approaches.  We are well-intentioned and diligently here for you, but we don’t mind breaking (or ignoring) some “rules” about what is cool in the craft beer industry right now, what is normal to our region, or what is expected out of downtown Kalispell.  Fuck all that.  We have no issue with trying things that seem strange or creating a little chaos, if it serves our greater interest in becoming a fixture of goodness in the Flathead Valley.  We are bent on contributing to a growing craft beer culture in Kalispell, but at every step of the way making sure that we are supporting worthy causes, lifting up our new and old friends, and behaving as stewards of the significant history of our home, even if it means thinking outside the box.

(We feel that if the Chaotic Good personality had a mascot, it would almost certainly be a porcupine.)